Diverse Perspectives in Issue Management Bring the Unseen to the Surface

Independent feminine care company Honey Pot reached $6.4M in revenue in 2021 and holds Black American women as one of its primary audiences. Over the summer, Honey Pot worked through a labeling and communications issue that left it on the edge of irreparable brand damage. In short, the company changed preservative ingredients that called into question its organic certification status.

An ingredient reformulation coupled with a lack of communication is a serious matter for any hygiene company to navigate, and it would be easy to approach the problem as one of packaging and disclosure. However, a more consequential issue was below the surface – rooted in a deeper understanding of the audience – that executives can learn from.

What was deserving of attention and immediately understood by the Black community and those who understand this audience was the potential for a different type of fear and resentment unrelated to product labeling. This fear comes from the decades-long history of Black-owned personal care companies being acquired by larger corporations that disengage, if not ignore entirely, their long-time customer base. Because of that pattern, if a Black-owned company makes a major shift (intentional or unintentional), its core audience assumes that it’s sold the business and receives the message it’s sold out its customers by turning over the reins to majority-white corporations. 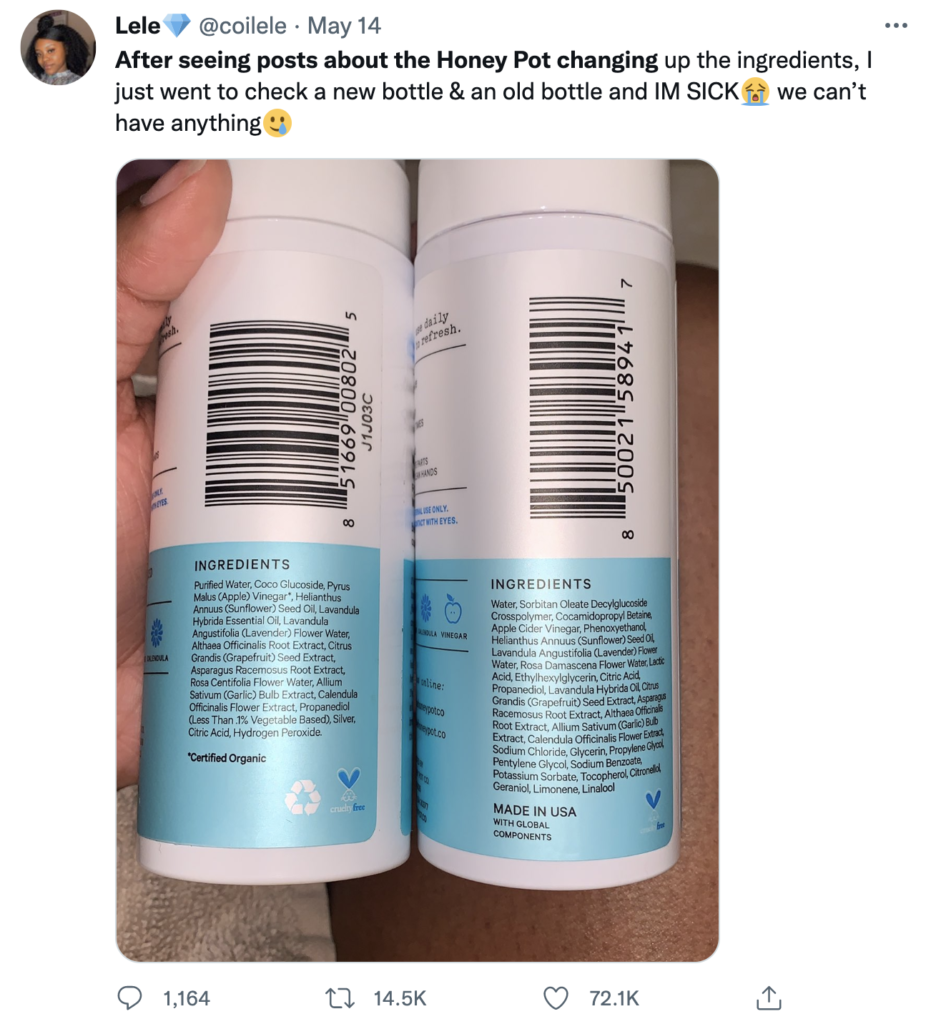 Some communities recognize this issue immediately, though most don’t. Having a diverse set of perspectives assessing a challenge will make or break a company’s corporate reputation. Because, even with consumer data and insights in hand, if the right mix of people aren’t in the room, this is the kind of nuanced issue that can be missed. If Honey Pot had treated this issue as it appeared on the surface – as an ingredient issue – it would have failed to address a much deeper concern of its loyal customers.

CEO Beatrice Dixon held both concerns with equal regard when she addressed her social media audience in an impromptu statement within a day of the backlash. She validated the audience’s feelings and quickly confirmed that her company had not been sold. 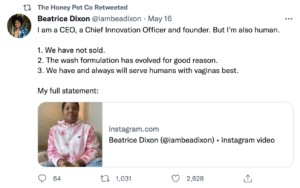 How We Got Here

Historically, most large corporations have neither understood nor done enough work to understand the needs of minority customers. In the delicate space of personal and hair care, many Black-owned businesses looked to the great Madam CJ Walker as the prototype. She filled a huge need and became wildly financially successful in the process. And although her company remained family-owned until it ceased operations in 1981, it was purchased by Sundial Brands in 2013. Shea Moisture – a beloved haircare brand with a large following among Black women – was sold to Unilever by way of Sundial Brands in 2017. Carol’s Daughter, another Black hair care line, had a valuation of $27 million at the time of its sale to L’Oreal in 2014. With each acquisition, the products and packaging changed, the marketing and communications changed, and the face of the company, i.e., the brand image, changed.

Further, despite it being known that “representation matters,” acquiring brands seemed to translate that sentiment only into adding Black and Brown people in advertising. Consumers are savvy and see past these performative measures. They want to know their needs are considered at the production level and that their support (dollars) is benefiting their own communities. For Black consumers, specifically, this is a sentiment born out of a strong sense of community and loyalty – two values that are very important to minority groups. It’s a means of protection and preservation. And for the Black population in the United States, the economics of keeping money within the community psychologically translates to security and safety.

What Companies Can Do About It

The tendency with the acquisition of independent Black personal-care companies is that they become more “mainstream.” Products undergo changes to appeal to wider audiences. Companies also tend to deemphasize the needs of the original customers and instead use them as the basis to attract more mass customers. This leads that customer base to feel as if their patronage isn’t enough or is unimportant.

There are several actions corporations could take that – if authentic and not performative – could help to alleviate this consumer sentiment and position themselves as an extension and celebration of the community rather than an opportunity to change it.

(1) Audience insight. In the early stages of acquisition, companies would be wise to spend more time researching and understanding the existing customer base. Why are they the primary audience? What do they care about? What is their share of revenue contributed across the brands? How can we retain them as a customer?

(2) Communications and marketing strategy. When developing both internal and external communications, carefully consider how the new company is brought into the portfolio of brands. Is it given appropriate status and urgency, or is it shown a less-than-enthusiastic introduction? Even if the fanfare would be less than that of a larger company for financial reasons, be mindful that the perception may be that’s because it’s a minority-owned company. Externally, is the marketing of the new brand inclusive and done so in a way that instills trust? Is there open communication and opportunities for proactive growth? Customers are aware and generally distrustful of any change in a product they’ve grown to know and love. Taking care can go a long way in maintaining that relationship. In either case, authenticity and consistency is paramount.

(3) Product and brand planning. Long-term, how is the brand being managed? Are there resources in place to track how the brand is received by previous and newer audiences? During product development post-merger, how is the company ensuring the product will be the same, if not better, after acquiring the smaller BIPOC-owned business? Are products being further developed with the previous/existing customer in mind, not just with the goal of getting a mainstream audience to expand their brand loyalty?

In this instance, Honey Pot actually had a diverse leadership team and employee base and still initially missed this important and nuanced angle prior to making the ingredient and packaging change. However, CEO Beatrice Dixon was able to quickly understand and react to the sentiment from her customer base. Deep knowledge of her audience and being a part of their community allowed her to quickly correct the mistake rather than ignoring, doubling down, or making matters worse – an incredibly important characteristic for a leadership team.

The first step in making change is being aware. And awareness expands when situations and challenges have input from many different angles and perspectives. All this reinforces the importance of the goal and intention of DEI efforts: Having a diverse set of eyes and ears at every level and corner of an organization – including not just BIPOC customers and employees but also taking holistic, deliberate, and sustainable actions that impact an entire organization from its business leadership to product and marketing – drives better business outcomes.

Roberta Hatchett is a consumer marketing expert and leader with experience spanning ad agencies as well as public and private companies. A senior director at Purple working in digital transformation, she has expertise in messaging and creative integration, digital and social media strategy, and content creation.

CEOs Foster the Dynamic Pull at the Heart of Breakthrough In...

CEOs Embrace Expectation to go Beyond Corporate into Societa...
view all